“Dogfooding” is a term widely used in software development, and it refers to a company uses its own work heavily to help ensure a high level of quality. Last month, Mitch Felderhoff did some very literal dogfooding. He’s the president of dog food brand Muenster Milling Company, and he spent 30 days eating nothing but his own dog food.

“I was buying a large bag of Purina dog chow for my dog at Walmart and standing in line at the check out.

“A woman behind me asked if I had a dog.

“On impulse, I told her that no, I was starting the Purina Diet again although I probably shouldn’t because I’d ended up in the hospital last time, but that I’d lost 50 pounds before I awakened in an intensive care ward with tubes coming out of most of my orifices and IVs in both arms.

“I told her that it was essentially a perfect diet and that the way that it works is to load your pants pockets with Purina nuggets and simply eat one or two every time you feel hungry and that the food is nutritionally complete so I was going to try it again.

“I have to mention here that practically everyone in the line was by now enthralled with my story, particularly a guy who was behind her.

“Horrified, she asked if I’d ended up in the hospital in that condition because I had been poisoned by the dog food. I told her no; I stepped off a curb to sniff a poodle’s ass and a car hit me. 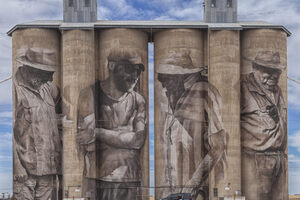 This project started as a happy confluence of needs. Street artist Guido van Helten was looking for a large-scale canvas, and the rural county of Yarriambiack Shire was searching for a beautification project.

Large-scale murals can be tricky to coordinate, so the county worked with van Helten to select a location along a rural crossroads in Brim. Yarriambiack Shire coordinated with the Grain Corp to use four of their silos as canvases for the project.

Before selecting his subjects, van Helten lived in the area for a few months getting to know the community. He then painted four tender portraits featuring several generations of local farmers. They were painted in a very detailed fashion, with a soft style that accentuated the wrinkles on their clothing and in their faces.

This resulted in a stunning work of art that looms over the beige landscape. The mural became so popular that Yarriambiack Shire commissioned five additional murals from various artists. They are now spread over 124 miles (200 kilometers) of rural roads. They have become known as the Silo Art Trail. 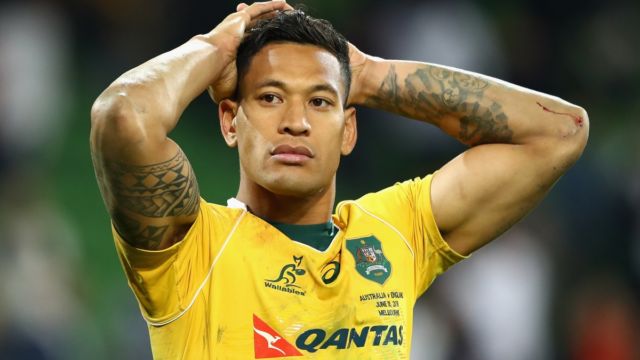 Rugby Australia chief executive Raelene Castle concedes Israel Folau’s sacking was a distraction to the Wallabies ahead of their failed rugby World Cup campaign, but has backed the decision as “a positive thing from a culture perspective”.

Folau was an established member of the Wallabies squad before he was sacked by RA in May for making controversial social media posts about homosexuals and others who he said would go to hell.

The sacking of the 73-Test international dominated headlines in the build-up to the World Cup in Japan where the Wallabies made an exit in the quarter-finals following a humiliating 40-16 loss to England.

“I think when you’ve got a player who chooses to put their views in front of the views of the team and we end up with headlines and people writing things about Rugby Australia as opposed to writing about the rugby, that’s never helpful. Of course it’s not.”

Folau is suing RA and Rugby NSW for unlawful termination of his contract.

A report in The Daily Telegraph newspaper has suggested the well-publicised falling out between Castle and Michael Cheika — who stepped down as Wallabies coach a day after the loss to England in Oita — might affect RA’s legal case against Folau.

Castle said RA had made the right decision to terminate Folau’s contract because it was in the best interests of the game in Australia.

“Rugby Australia were strong in the stance that his public views were unacceptable and then stood up for a culture which is about inclusiveness,” she said.

“It’s a positive thing from a culture perspective.”

RA ‘had to make a change’ on Cheika’s role

RA is in damage control following Cheika’s decision not to seek reappointment as Wallabies coach.

Cheika claimed he “pretty much” had no relationship with Castle and RA chairman Cameron Clyne when he announced he was stepping down after five years in charge of the Wallabies.

He also took aim at RA’s decision to establish the director of rugby role following the Wallabies’ disastrous 2018 season – in which they lost nine of their 13 Tests – with Scott Johnson taking up the position.

Castle said she and Cheika had “worked well together” when she began as RA chief executive early last year.

She defended the decision to appoint Johnson as director of rugby, as she and the RA board felt it was necessary based on how poorly the Wallabies had performed in the year before the World Cup.

“At the end of the day, our win rate was less than 50 per cent. We had to make some decisions … we decided supporting Michael after four years build-up was the right thing to do, that’s what the board did.

“But we also needed to think about the support we put in place.”

reply
Think we should sue him for lost earnings

COPENHAGEN (The Borowitz Report)—After rebuffing Donald J. Trump’s hypothetical proposal to purchase Greenland, the government of Denmark has announced that it would be interested in buying the United States instead.

“As we have stated, Greenland is not for sale,” a spokesperson for the Danish government said on Friday. “We have noted, however, that during the Trump regime pretty much everything in the United States, including its government, has most definitely been for sale.”

“Denmark would be interested in purchasing the United States in its entirety, with the exception of its government,” the spokesperson added.

A key provision of the purchase offer, the spokesperson said, would be the relocation of Donald Trump to another country “to be determined,” with Russia and North Korea cited as possible destinations.

If Denmark’s bid for the United States is accepted, the Scandinavian nation has ambitious plans for its new acquisition. “We believe that, by giving the U.S. an educational system and national health care, it could be transformed from a vast land mass into a great nation,” the spokesperson said.

US Rules Airlines Must Allow Miniature Horses to Fly as Service Animals
Saturday August 10th, 2019 at 1:12 AM

For all its indignities, air travel is also surprisingly democratic—people of all stripes and shades crammed together into a small metal tube and lofted into the sky. Some of them have service animals, some of which are a hair more exotic than a vested dog. This has caused some spirited debates. But on Thursday, the U.S. Department of Transportation issued its final guidance on the subject and added miniature horses to the list of service animals that can fly in any cabin.

You may have some questions. Yes, miniature horses make great—if rare—service animals for those with emotional and physical disabilities. Standing 2-3 feet tall, weighing around 100 pounds, and often living 35 years or longer, they're not unlike large dogs in their comforting presence and ability to perform complex tasks. And yes, airlines have historically balked at the idea of seating a horse in Economy Plus. The DoT's statement notes that air carriers "have asked us to declare that a wide variety of species (e.g., birds...and animals with hooves or horns) constitute 'unusual service animals' that may be categorically banned."

But with trained miniature horses officially recognized in the Americans with Disabilities Act as legitimate service animals, the agency has decided they must be able to fly. The declaration isn't a law per se, but it indicates that they'll punish U.S. airlines that violate it.

"In this Final Statement, after reviewing the comments on this issue, we believe that it would be in the public interest and within our discretionary authority to prioritize ensuring that the most commonly recognized service animals (i.e., dogs, cats, and miniature horses) are accepted for transport," the document reads.

So anyone with a service miniature horse and the need to fly across the country will no longer have to say bye, bye to Little Sebastian at a TSA checkpoint. The Department does note that airlines are still allowed to reject certain approved animals if they're deemed too large, too dirty, or too dangerous. But do airlines really want the PR headache of a hundred smartphone videos showing a flight attendant boot a little horse off a plane?

Undoubtedly, some of you reading this aren't exactly thrilled about sharing your next flight with a barnyard animal. You should also know that the guidance only allows airlines to specifically ban snakes, reptiles, ferrets, rodents, and spiders from the cabin. Anything else presented as a service animal must be considered on a case-by-case basis, though it acknowledges that documented complaints about that particular species from other fliers is grounds for refusal. We wonder where that leaves peacocks.

The rise in news stories like that peacock incident isn't random chance—according to the New York Times, the number of service animals on U.S. air carriers has increased year-over-year this decade, in particular jumping from 481,000 in 2016 to 751,000 in 2017. A few airlines have gotten ahead of the DoT by opening their cabins up to miniature horses in the last year or so—Southwest, Alaska, American, and United all previously stated that equanimous equines are OK to fly. Now the sky is literally the limit.

The declaration contains other important rules for service animals. You can bring up to three critters on a flight, but only one of them can act as an emotional support animal—the other two must be physically necessary. Airlines are allowed to require advance notice for emotional support animals, not physical service ones. Complicating both of those rules is the fact that airlines are still forbidden from demanding proof of an animal's training or certification outright, though there's a loophole for carriers who say they're conducting a "threat analysis."

The animals also don't have to be restrained in any specific way in the cabin as long as their movements don't inconvenience other passengers, though there's a lot of "case-by-case" logic sprinkled throughout the rulings. But bottom line, don't be shocked if you see a tiny horse strolling down the aisle in the not-too-distant future. Don't fret, though—they're still required to be housebroken.