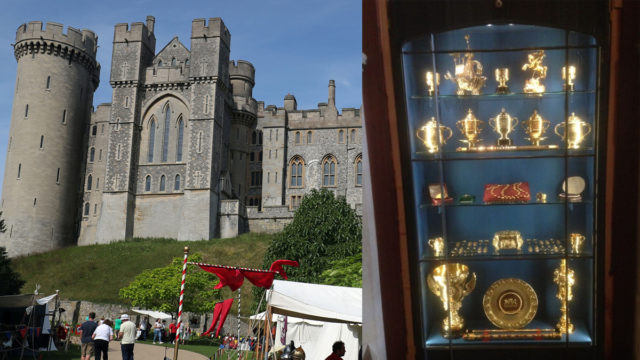 “Irreplaceable” gold rosary beads carried by Mary Queen of Scots to her execution in 1587 are among treasures worth more than £1 million ($A1.83 million) stolen in a raid at Britain’s historic Arundel Castle.

Other precious items taken in the burglary of the near-1000-year-old West Sussex castle include coronation cups given by Mary to the Earl Marshal as well as gold and silver treasures.

Staff were alerted to the break-in late on Friday (May 21), after a burglar alarm went off and police were scrambled to the scene.

A car thought to have been involved in the raid has since been found burnt out and abandoned.

“Various items have been stolen of great historical significance,” the spokesman said.

“These include the gold rosary beads carried by Mary Queen of Scots at her execution in 1587, several coronation cups given by the sovereign to the Earl Marshal of the day, and other gold and silver treasures.

“The rosary is of little intrinsic value as metal, but as a piece of the Howard family history and the nation’s heritage it is irreplaceable.”

The items were taken by breaking open a display cabinet in the public areas of the castle.

A spokesman for Arundel Castle trustees said the stolen items were worth a lot of money “but, as unique artefacts of the Duke of Norfolk’s collection, have immeasurably greater and priceless historical importance”.

“We therefore urge anyone with information to come forward to the police to assist them in returning these treasures back where they belong,” he said.

Arundel Castle dates back to 1067 and is the official seat of the Duke of Norfolk.

The duke is also the Earl Marshal of England, a title the family has held for over 500 years. The Earl Marshal organises major ceremonial state events such as the opening of Parliament.

Much of the castle and its surrounding gardens is open to the public for tours and events. It had reopened to visitors only on May 18 after England’s long coronavirus lockdown. reply
nothing to do, nowhere to go
Cammeray, New South Wales, Australia reply
Would be awesome if this was Pi